The day 3 got multiplied by 2

Its early morning on the 23rd March 2015 and we’ve just arrived at the hospital, I’m nervous as hell, I can’t watch casualty without wanting to lose my lunch never mind be in an operating theater with blood and guts everywhere. However, my feeling must pale into insignificance compared to how my better half must be feeling, she’s carrying 3 little lives in her belly and in a matter of hours is going to be in theater having a major operation to free the Pritchard 3.

As the morning progresses we miss our scheduled operation slot as there is an emergency with another mum, all ok I hope.

We sit in a small room just waiting, chatting about life trivia trying to take the focus away from the impending surgery, it’s not working!

Chat leads to naming the little angels/terrors (delete as appropriate) Triplet number 2 has a name, triplet number 3 has a name but poor old number 1 well he’s nameless. We band around just about every name we can think of but nothing, even my suggestion of Huey, Dewey and Louie is shot down and apparently #1, #2 & #3 is also not happening…………….

I’m sure we’re in some parallel universe where time travels at a much slower speed!

The time is now upon us, the door swings open and standing there is a nurse ready to take us to get prepped, the only thing that springs to mind is “walking the mile”.

I’m given a very fetching blue outfit consisting of trousers, and t-shirt type thing and some sort of fetching blue headwear, this is not my finest hour! Then as if looking like an extra from a very low budget hospital drama wasn’t enough a hand pops around the curtain and gives me what can only be described as the Satan of footwear A PAIR OF WHITE CROCS!!!!!!!!!!!!!!!! These babies better be worth this.

So fully dressed in my “designer attire” there’s only one thing left to do, SELFIE!! Now I will say this is my first ever selfie so it needs to be pretty special considering the scale of what is going on. Well let’s just say a drunk one eyed person could have got the picture more in focus but hey let’s go and deliver some babies.

Leaving the cubical I feel like George Clooney in ER I want to shout “get me towels and a bowl of hot water were going to deliver these babies”, I’m sure reality was a little different and I had a look on my face that can only be described as a child on the first day of school!

I make my way across the corridor to a very large operating theatre to be greeted by the patient, her precious cargo and what must have been the entire medical staff the hospital has on shift at any one time.

The room is a hive of activity, apparently each baby will have their own team as well as a team looking after mum who is currently answering a million questions about her health etc. While all this is going on they are starting to administer drugs and injections. Now things are starting to become very real! Mum is now laying down while they check that everything from the neck down is numb, a sheet is pulled up from her waist so neither her or me can see what’s happening down south, all we know is there are a lot of people down there and this is not the time for dignity, oh and thank god she was able to shave!

Just after 12 o’clock the first incision is made and after lots of pushing and pulling we hear a little cry, triplet number one, Zac (yes we did settle on a name) has joined the outside world, a nurse brings him to the top of the bed so we can see him, he’s perfect, just like a little wrinkly old man covered in gunk.

I’m holding it together, I don’t even feel queasy, which is a right result although I don’t have a team of doctors elbow deep in my abdomen. Mum is doing amazing, were chatting as if nothing is going on, although the conversation is highly amusing as she’s off the face on the drugs they have previously administered.

Next up our little princess is born, Sophie. She has a set of lungs on her, she’s swiftly brought up to the top of the bed so we can see her and again she’s perfect, 10 toes, 10 fingers, everything is where it should be.

Now triplet 1 and triplet 3 are whisked off to a smaller room to be put into incubators as they are 8 weeks early. They are given oxygen and have full check overs.

At that point a moment of shear panic sweeps over me, where is number 2 – Ashley, we only met 2 babies and only heard 2 cries, now I’m not a religious person in any way shape or form, but at that moment in time I prayed to anyone that would listen.

Ash had come out not breathing and had been rushed to a smaller separate room to be revived, thank …………… (insert your chosen god here) he was ok, he just needed a kick up the bum to get him going.

Now while I can see all this going on mum is blissfully unaware and I’m not about to change that. So while the team of doctors stitch her up I go over to the smaller room to see the 3 tiny miracles.

There they are the tiniest most perfect things I have ever seen, at that moment our family had gone from 3 to 6 and I was the happiest man alive, time literally stood still.

I was so proud of mum she was amazing, a real trooper and at that moment in time I couldn’t be more in love with her, or our not so little family.

The babies are fussed, prodded and poked by their own team of doctors until they are happy they can be moved to the intensive care unit, which feels like an eternity.

Once they are taken up to ICU mum is moved to recovery where she has to spend the night due to the sheer scale of removing 3 little people.

The next few hours are spent in a haze of confusion, when can we see the babies, are they ok, how long does mum have to stay in recovery, I’m hungry (sorry that was just me) etc.………………...

Early evening I’m taken up to see the Pritchard 3 all of whom are having help with their breathing and are under heat lamps to control their temp, world meet Huey, Dewey and Louie, sorry I mean Zac, Ashley and Sophie…………. 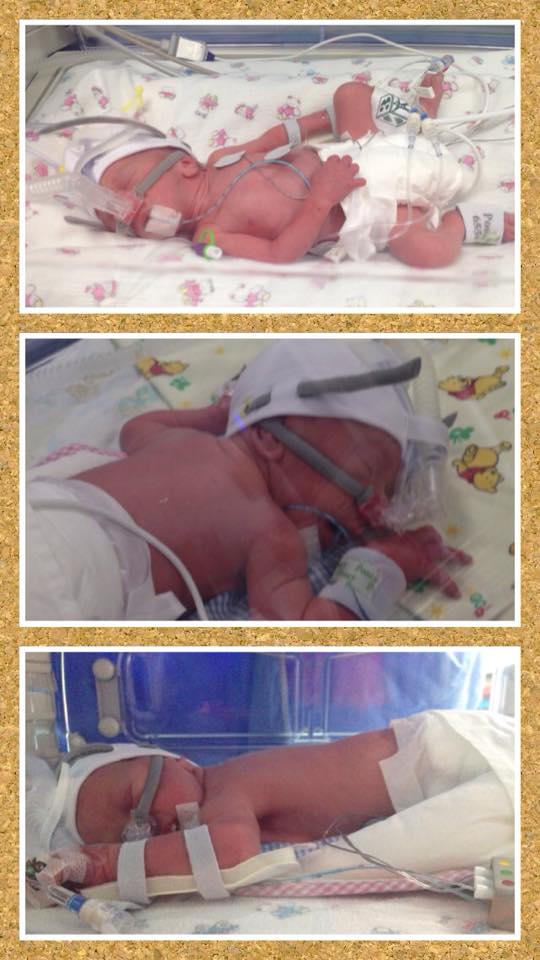